GEP pal Jeff Grace sits with Daniel Schweiger from The Film Music Institute to chat
about the music of the Netflix series SWEET TOOTH, directed by Jim Mickle.

From FMI: With his talent for often evoking homespun, rustic darkness from the terrifyingly intimate residences of “The House of the Devil” to “The Innkeepers,” the twisted families of “Cold in July” and “We Are What We Are,” an unforgiving western landscape in “Meek’s Cutoff” and the beast-prowling environs of “The Roost” and “The Last Winter,” composer Jeff Grace has been building an especially chilling and unforgiving repertoire. Beginning his career assisting Howard Shore on his “Rings” trilogy and “Gangs of New York,” the NYC-based Grace would find a gifted filmmaker to further lead him into the darkness with Jim Mickle. First teaming for the vampire apocalypse of 2010’s “Stake Land,” Grace’s evocative, western-tinged score evoked both a future’s impossible horror as well as the emotional bond between master killer and a newfound son of sorts.

“The American Horror Film of the Year”
– TWITCH FILM

“The Mayhem is beautifully composed. The Performances are terrific.”
– THE NEW YORKER

“Harrowing! Puts vampires back where they belong — in your nightmares, and at your throat!”
– NEW YORK OBSERVER 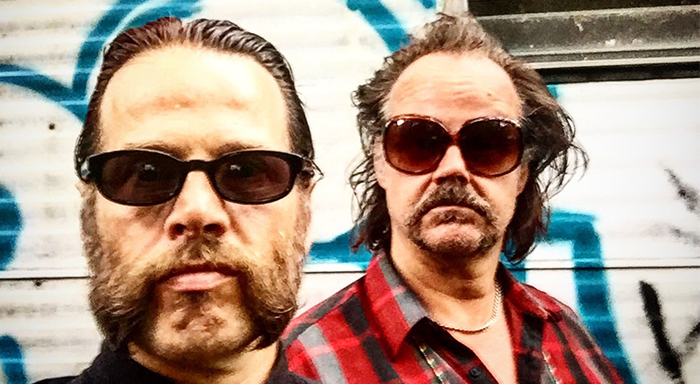 Listen to the radio clip:

FROM ICONS OF FRIGHT

Larry Fessenden is a jack of all trades within the horror genre. An actor, director, writer, producer, the filmmaker is not only one of the best auteurs in the last 20 years, but is also responsible for producing some of the most up and coming genre directors’ films. Ti West’s THE HOUSE OF THE DEVIL/THE INNKEEPERS, Jim Mickle’s STAKE LAND, Adrián García Bogliano’s LATE PHASES, and the list goes on and on. Fessenden himself has been one of the most influential filmmakers in independent genre films around, having helmed such revered films as NO TELLING, HABIT, WENDIGO, THE LAST WINTER and 2013’s BENEATH. Playing such a huge part in filmmaking in all aspects of the word, Fessenden and his company, Glass Eye Pix is celebrating 30 years of auteur-driven films, with an upcoming Scream Factory boxset featuring four of Fessenden’s films, a series of screenings of Larry’s films, and now, a mini-documentary series revolving around the various films Glass Eye Pix was responsible for.

NOW ON SHELVES: The Anatomy of Fear

The Anatomy of Fear: Conversations with Cult Horror and Science-Fiction Filmmakers is now out! Includes interviews with Fessenden and Glass Eye Pals Jim Mickle, JT Petty and lots of luminaries and unsung heroes of the genre.

Check it out on amazon.

GEP pal Jim Mickle will show a sneak preview of his new film, COLD IN JULY, in NYC at IFC Center tonight, 8pm. He and Don Johnson will be on hand for a Q&A, moderated by Fessenden. Tickets here.

More on COLD IN JULY from IFCCenter.com:

How can a split-second decision change your life? While investigating noises in his house one balmy Texas night in 1989, Richard Dane puts a bullet in the brain of a low-life burglar, Freddy Russell. Although he’s hailed as a small-town hero, Dane soon finds himself fearing for his family’s safety when Freddy’s ex-con father, Ben, rolls into town; hell-bent on revenge. However, not all is as it seems. Shortly after Dane kills the home intruder, his life begins to unravel into a dark underworld of corruption and violence. Twists and turns continue to pile up as the film reaches its inevitable destination: a gore-soaked dead end.

Michael C. Hall brings a shell-shocked vulnerability to his portrayal of Dane that contrasts perfectly with the grizzled “badasses” portrayed by Sam Shepard and Don Johnson. Directed with an excellent eye for the visual poetry of noir, this pulpy, southern-fried mystery is a throwback to an older breed of action films; one where every punch and shotgun blast opens up both physical and spiritual wounds. Cold in July is hard to shake as an east Texas summer.

If you didn’t check out Beck Underwood’s Creepy Christmas Film Festival when it first unspooled in 2008, why not treat yourself to a sustained Holiday high with this virtual advent calendar?
Unwrap one short a day from a different filmmaker (including Underwood, Larry Fessenden, James McKenney, Ti West, Graham Reznick, Jim Mickle, Sarah Driver, David Leslie, Mary Harron, Glenn McQuaid, and many many others…) every day till Christmas.
Or if you feel like gorging, watch them all at once. Drop us a   Continue Reading »