RogerEbert.com interview: The Past Inside the Present

SHORT FILMS IN FOCUS: “THE PAST INSIDE THE PRESENT”

James Siewert’s 13-minute short film “The Past Inside the Present” is like a Laurie Lipton drawing come to life. The stunning black-and-white imagery of humans connected to recording devices via old wiring from their brains to an old Betamax is the sort of thing Lipton would dream up for one of her insanely intricate pencil drawings. This is not to suggest Siewert’s film is derivative. On the contrary, Siewert’s vision aims more for an emotional connection between the characters (even in what appears to be the absence of emotion) whereas Lipton often revels in the absurd and grotesque.

Siewert’s project concerns a couple who, without saying a word to each other, plug themselves into recordings of their memories as their relationship appears to be dying. The tops of their heads are then removed to reveal a series of plugs and wiring that connects to an old Betamax that has tapes from their past. They are soon either watching or are recording an intimate encounter of themselves until the transmission is interrupted. It’s a visual idea that seems wrapped in absurdity until one realizes that we’ve all fallen into this trap of relating our memories and emotions through technology.

It’s the kind of short film that sucks you in just with the visual language. Siewert’s film is black-and-white and uses pen and charcoal drawings that create hypnotic images. Geoff Saba’s score is a nearly constant drone that perfectly complements the synthetic reality Siewert has on display. One moment that sums up the theme of the film is the image of the couple sitting on the bed naked while the word “DISCONNECT” can be seen on the TV screen behind them. Once they plug themselves in, the transmission takes effect and they become tuned into each other. 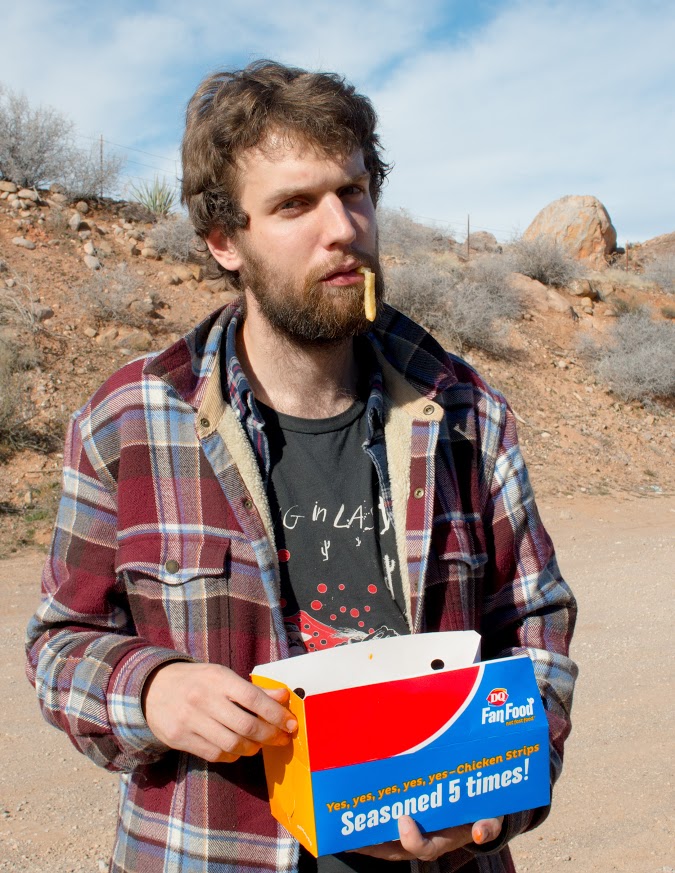 If I had to guess your inspiration here, I would say Philip K. Dick with a trace of Richard Linklater’s “Waking Life” and David Lynch. Is there any accuracy to that? How did this come about?

It’s hard for me to draw a straight line between any one source of inspiration and the final product. The kernel of the idea was just visualizing these bisected heads with analogue circuit boards in them.

I watched a lot of cyberpunk movies as a teenager (when I originally had the idea)—“Ghost in the Shell,” “Akira,” “The Matrix,” and “Videodrome” as well as Chris Cunningham’s video for Bjork’s “All is Full of Love”, and so all these images of bodies being transformed and fused with analogue technology were sort of buzzing around in my head. The images from these films I’m sure commingled in my mind and formed the technological iconography of the film.

The narrative arc came to me in pieces over the next several years as I navigated college. From the beginning I knew that the circuit boards in the character’s heads would allow them to mainline some kind of sexual experience, but as I disconnected from my friends from high school and home I had the idea of using the circuit boards to have the characters (try to) reconnect with the past. Then the film became much more about an imperfect degraded nostalgia, and how relationships become empty rituals through repetition.

As far as “Waking Life” and other rotoscoped films are concerned—I certainly knew it had been done. I actually haven’t seen all of “Waking Life”—I have seen all of “A Scanner Darkly”—but in all honesty I never liked the look of these films. The appeal of rotoscoped footage to me was the hypnotic flickering vibrations of the images, that I feel induces a trance-like state. The Linklater films have some of that but the animation seems so smoothed over that it feels like a lot of the 24 frames-a-second rhythmic pulsing is lost. There’s an animator who went to my college a few decades ago, Jeff Scher. He does much more aggressive rotoscoping work with a lot of bright primary colors. I would say I was more influenced by this style of rotoscoping than the ones that have been made into feature length films.

The concepts also remind me of the intricate drawings of Laurie Lipton, who often infuses human bodies with technology. I feel like you two are kindred spirits with how much time and effort you put into your pieces and the themes within them. Is there an overall statement about technology and/or relationships you want people to take away from this film?

I don’t think it’s a statement about any particular era of technology—since the beginning of language, and certainly written language we felt we have the ability to access the past through media, so it’s not new.

I guess that’s what I want the film to highlight, is that though technology can more and more accurately simulate for us the experience of the past, these simulations are just a seductive illusion and obscure the truth that we are inescapably trapped in the present. I hope the film communicates something of the melancholy of realizing you are not free to travel to the past, and can only view the world through the pinprick of the present.

I looked at some of Laurie Lipton’s work. It’s incredibly beautiful. I do draw in my free time and I feel like I’m always trying to master what these drawings do so well, which is present a world which can draw you into the finest detail and yet still hold up compositionally on a large scale. I think my drawings just tend to look like a mess from far away.

Getting back to the time consuming process of drawing over 7,000 frames, what was that process like? What kept you going?

The process was challenging in the way you might expect: it was hundreds of days of monotonous work that only changed very gradually. But it kind of suits my personality type. I do well with very gracious but steady progress, as long as I’m moving forward at a constant rate the speed doesn’t matter. In fact all things being equal I prefer to move slowly; I get overwhelmed easily so feeling like you are tackling a film one frame at a time is very comforting to me.

Rotoscoping allows you to operate on auto-pilot mentally. I listened to a lot of podcasts and audio books during the making of the film: a lot of Murakami books, all of the “Game of Thrones” books, War and Peace, etc.

I definitely did slow down in the second half—it does start to feel endless at a certain point. But I think the thing that kept me going was just how much of an asshole I would be to waste everyone’s time on the film if I didn’t finish it.

Technology geeks like me will note the Betamax player. That device could have been anything. So why Betamax?

Well, like I said—I’m a big fan of “Videodrome”and that era of technology—the idea of a circuit board bisecting people’s heads only works if you have some kind of slightly analogue technology driving the whole thing. So that narrows it down: it has to be some sort of tape-based format that goes out to RCA or component cables. In terms of the Betamax specifically I just liked the look of the tapes: they have just one circle like a cyclops. There’s a theme of circles in the film—and narratively the film depicts just one cycle in the repeating loop that the characters are continually moving in. So the single circle of the Betamax tape seemed like it reinforced this iconography of circles and loops I was trying to create.

I think the response has been mixed? You never really know because you don’t hear from people that don’t like it. But I’ve been rejected from a lot of the big American festivals, so I think it’s obviously not a complete crowd-pleaser. At least one festival gave me feedback about why they ultimately rejected—but I’m not sure I’m allowed to talk about that. I think some people find it slow and a little pointless.

However, ultimately you end up having conversations with people that do connect with it. The film was screened to a mostly elderly audience as part of a lifelong learning class back in January. At the end of the screening a woman came up to me—I think she was in her late 70s—and told me that she was a writer and that she was losing her memory, she would forget words more and more frequently deeper into her old age. She said that she related to themes in the film of losing the past despite one’s best efforts to preserve it. It’s cliched to say but the moment of connection I had with that woman made me feel like making the film was all worth it. I make these things as a way to give voice to my private anxieties and fears and it’s always gratifying to know you aren’t alone.

I’ve been working as a cinematographer and visual effects artist for the past year and half or so. The first feature film I worked on as a cinematographer, “Like Me,” just premiered at SXSW a few weeks ago. It was an incredibly steep learning curve but I think the film ended up being pretty interesting. Right now our whole company is gearing up to shoot a new thriller. In between these projects I try to direct music videos or draw. But no one wants to pay me to do those things as of yet, or at least, I haven’t been able to make it work yet.

Check out the interview…

Tagged with: The Past Inside the Present

The Transfiguration opens in NYC FRIDAY! »