Austin Film Festival (AFF), (OCT 27—NOV 3, 2022)  has announced that The Whale will serve as the festival’s Opening Night selection. Directed by Academy Award®-nominee Darren Aronofsky (Requiem for a Dream, BLACK SWAN, The Wrestler).

Additionally, AFF is hosting a special screening of James Gray’s latest film Armageddon Time, with Gray in attendance to receive this year’s Bill Wittliff Award for Screenwriting. The festival is also welcoming a wide slate of films including Israeli filmmaker Jonathan Dekel’s Checkout and the world premiere of local Austin filmmaker Riley Cusick’s The Wild Man. 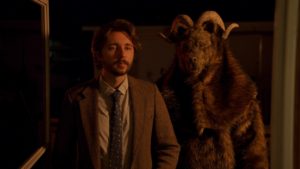 Synopsis: A son takes care of his father with a deteriorating mental condition where he believes he’s a wild animal. The films cast includes Cusick, Larry Fessenden, Jenna Kanell, and Kelli Maroney.