LISTEN NOW: Tourists in Trouble with James Felix McKenny’s THE TRIBUNAL OF MINOS – TALES FROM BEYOND THE PALE SEASON 3

Indiewire presents James Felix McKenny’s Season 3 TALES FROM BEYOND THE PALE episode, THE TRIBUNAL OF MINOS.

The season continues with filmmaker James Felix McKenny’s “The Tribunal of Minos.” Listen to the episode above, and read an interview with McKenny conducted by Indiewire’s Eric Kohn about the inspiration for the episode below.

Pre-order the third season of “Tales From Beyond the Pale” here.
Your story involves American tourists getting more than they bargained for in a foreign land. We’ve seen the trope before in horror films. What inspired your take?

I wasn’t really thinking about the whole fear of being away from home or fish out of water trope when I was writing it, but you’re right, it’s a reliable standard. Back when Glenn started talking about doing “Tales” and asked me to do one — I eventually had to bow out of the first two seasons due to commitments to films I was working on — I started listening to these audio dramas put out by Big Finish Productions based on “2000 AD” comics and the classic “Doctor Who” television series that use the original actors from the show.

So my starting point was really the old “Doctor Who” formula of a somewhat condescending older man and younger female companion being dropped in an alien environment where they are pursued by a monster. I’m sort of obsessed and frustrated with the whole American Culture Wars thing, so having these two people from opposite sides of the argument forced to spend time together provided an opportunity to explore that conflict. I was hoping to show that regardless of their beliefs, people are people with their own complexities and contradictions and not just screaming caricatures. Although I did write this story before the current Republican presidential race, which has turned out to be pretty cartoonish.

Your movies always have a very DIY, handmade feel. How did that sensibility translate into the production of a radio play?

Yeah, I love things that are a little rough and look like they were made by humans rather than computers. I really want to keep the old traditions alive, even when working in digital formats.

For the audio drama, obviously there were no props to make or sets to paint, but there was still a lot of stuff I could do myself. Beyond the writing and directing, I cast people I knew and had worked with before on our little handmade films, did the editing and the sound design myself before handing it over to Tom Effenger for the final polish and mix. This is what we try to do with our films — get the thing as close to a finished project as we possibly can before hiring experts to bring it across the finish line.

Angus Scrimm is the main actor here. What’s your history with him?

I cast Angus in the first film we made for Glass Eye Pix in 2003, “The Off Season.” I had him in mind for the role, but didn’t think our $20,000 budget could afford a name actor from Los Angeles. He happened to be on the East Coast for a horror convention the weekend we were to begin shooting, so we gave it a shot to see if he’d be interested in doing it while he was out here. Turns out, he really wanted to visit Maine, where we were shooting, and came up, saving us some money on travel and giving us a very affordable rate as long as we agreed to get him a lobster dinner.

“Regardless of their beliefs, people are people with their own complexities and contradictions and not just screaming caricatures.”

Angus is the sweetest, kindest man you’ll ever meet. We’ve been friends ever since and I always try to work him into any project where casting him makes sense. I think he really clicked with our other main actor in this audio piece, Mizuo Peck, someone whom I met through my friends that form the band Shellshag. Mizuo appeared in another project I did, an odd little sci-fi short  — also somewhat inspired by old “Doctor Who,” I’m just realizing — called Chapter Four. She does a lot of voice work, so she seemed like an obvious choice for this “Tale,” but I think she’s probably best known for playing Sacagawea in the “Night at the Museum” movies.

The music, by Carrie Bradley, is a distinctive aspect of the episode. How did you get connected with her and collaborate for this piece?

Carrie is a friend of mine that I’ve seen play violin many many times with one of my favorite bands, The Breeders. Actually, all of the music that I had been exposed to over the years has been her performing with others — she’s also worked with Jonathan Richman and Love & Rockets, as well as her own bands The Great Auk, 100-Watt Smile and Ed’s Redeeming Qualities. But it was just a few years ago when she sent me some home recordings of some music she produced entirely on her own. That stuff really stuck with me. I figured the violin would fit well with the Greek setting, but Carrie took it so much further and exceeded my expectations a hundred fold. She wrote, performed and recorded everything herself and that singular vision really adds an incredible third voice to the piece. I can’t wait to rope her into scoring a feature film.

Why does the Glass Eye Pix model work for you?

I had already written, directed, edited and produced my first feature and sold it to a distributor before I came to work for Larry and Glass Eye Pix.

The film was a blood-soaked black comedy, called “CanniBallistic,” where I had only $8000 of my own money to make a movie and had to do a dozen different jobs myself — including making props, buying wardrobe, securing locations, grocery shopping for our four-person crew, building the film’s website, etc., mainly because I’m the cheapest resource that I have.

That’s pretty much how I continued to make movies once I met Larry, who very generously offered to bankroll a few more features that I wanted to do. For the most part, the budgets on our movies have been a lot lower than the rest of the films that Glass Eye Pix produces and I take bringing in a film on or under budget very seriously, so I still perform a lot of different tasks. So do the other members of Team MonsterPants, who all have a wide range of skills thanks to their backgrounds in construction, electrical work, fine art, carpentry, etc., as well as filmmaking. On the first three films we did for Glass Eye Pix, Larry was great about giving us the freedom to do what we do the way we do it, even if our methods could be a bit unconventional at times.

What are the biggest challenges you face with respect to the kind of stories you like to tell?

I really enjoy working in the more fantastic genres, but when I sit down to write I tend to get a little more involved in the characters or whatever message I’m trying to convey than some of the horror or action elements. I always say that my movies are a little too highbrow for traditional or mainstream genre movie fans and way too lowbrow for the art house crowd. This audio drama is probably a perfect example of this, I’m sure there will be plenty of listeners screaming at their mp3 player, “Enough with this talky talky crap, where’s the Minotaur?”

Obviously, there’s a long tradition of social commentary in horror and science fiction,. I’m just not sure it’s always welcome if it takes priority over the scares and action or if it’s not really obvious or heavy-handed. I made a film called “Satan Hates You” a few years back that was an homage to the old Christian scare films and Jack Chick comic tracts. But because I didn’t openly mock Christianity, I took a bit of heat from people who missed the satirical elements and thought I was an actual hardcore right-wing evangelical Christian, which couldn’t be farther for the truth.

I just write things that interest me, which is very satisfying artistically, but my tastes don’t always mesh with those of ticketbuyers and film bloggers. Oh well.

I have this sort of very DIY, one-man-band feature film project that I have been pecking away at in my free time over the last couple of years and probably won’t see the light of day for at least a couple more. I’m working on a script for a folk horror feature that I’ll be trying to raise money to shoot next year and I’m also editing a short that I directed called “Candyland,” which features a cast almost entirely made up of 12-year-old girls. We’ll be submitting that one to festivals this summer.

I also produce and co-host the world’s worst podcast, Before Geeks Were Cool, which is available on iTunes and have an ongoing line of designer toys, most of which are a series of action figures called the Sea-Borgs, that I hand sculpt and cast in plastic resin in my home studio. I may never get rich doing any of this stuff, but it’s all very satisfying. 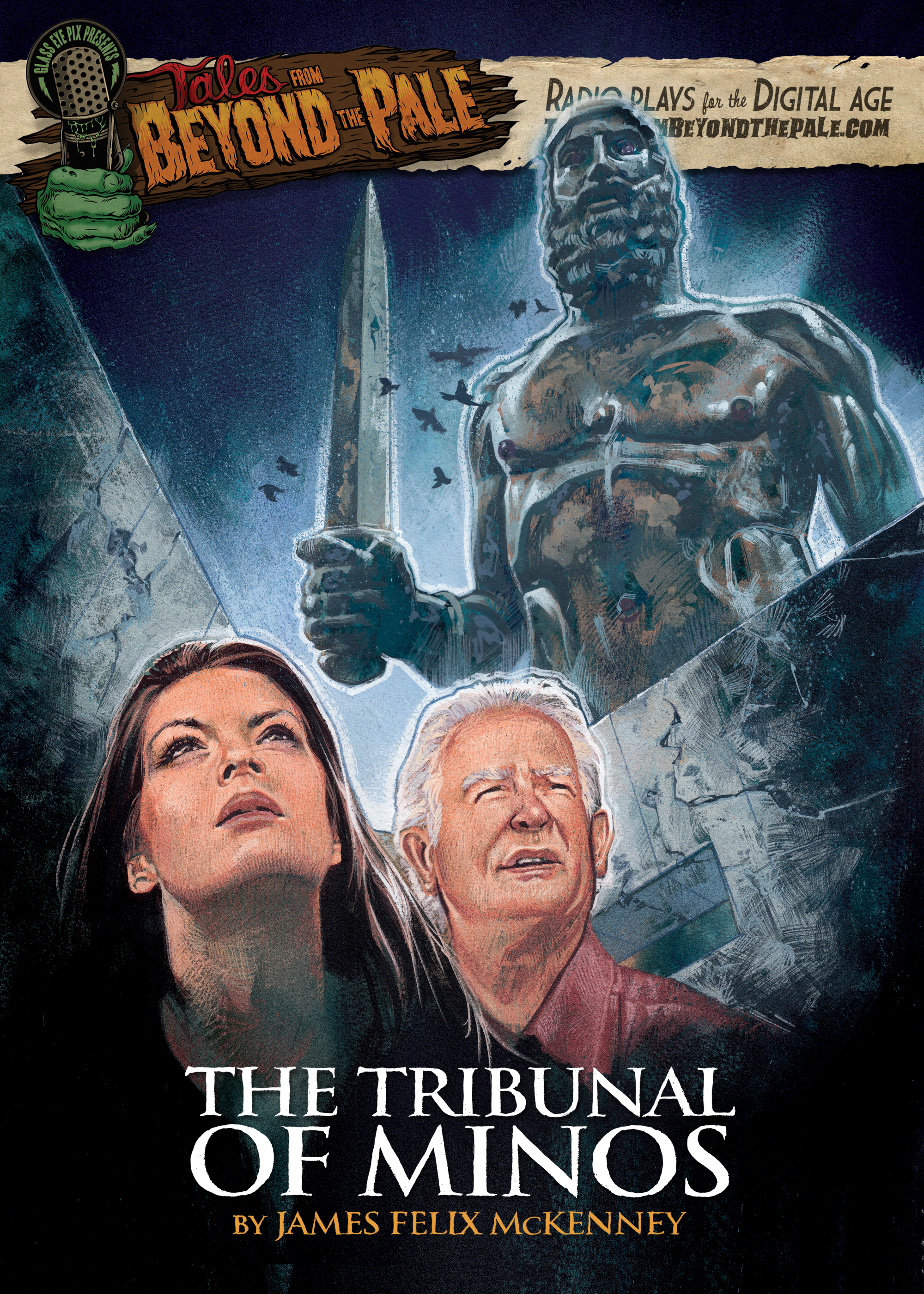 Tagged with: Indiewire, James Felix McKenny, Season 3, Tales From Beyon the Pale, Tales from Beyond the Pale Season 3, The Tribunal of Minos

« TALES FROM BEYOND THE PALE Hits Number One Spot on iTunes

LISTEN NOW: Let Graham Reznick’s THE CHAMBERS TAPE Guide You – TALES FROM BEYOND THE PALE SEASON 3 »