LISTEN NOW: Let Graham Reznick’s THE CHAMBERS TAPE Guide You – TALES FROM BEYOND THE PALE SEASON 3

Indiewire presents a guided meditation unlike any you’ve tried before! Graham Reznick’s THE CHAMBERS TAPE (ranked #1 on iTunes Audiobooks in Fiction) is streaming now.

The season continues with filmmaker Graham Reznick’s “The Chambers Tape.” Listen to the episode above, and read an interview with Reznick conducted by Indiewire’s Eric Kohn about the inspiration for the episode below.

The structure of this narrative is very innovative, since it takes the form of a guided meditation. How did this idea come together?

“The Chambers Tape” looks at the sometimes surreptitious use of “science” as the promise of a magical cure-all. (“We’ve infused our special meditation tape with scientific technology to enhance your results!”) It’s a strange racket and distracts from legitimate and truly positive advancements.

There’s always been complicated relationship between the general public and the mental health industry. It’s only in the last 20 or 30 years that the idea of going to therapy has become less taboo. I think there was a strange fear that a psychologist might have some special power, that they could use the power of their voice and choice of words to alter the mind and personality of their patient. They were referred to as head-shrinkers, or shrinks – which implies a fearful, controlling presence.

“There’s always been complicated relationship between the general public and the mental health industry.”

Around the same time that therapy became more acceptable, the New Age movement and eastern practices like meditation became more popular. Guided meditation became a big thing and continues to this day to be incredibly popular on YouTube – with many professional and amateur variations available.

If you really give yourself over to a guided meditation, if you trust in it the way you would trust a therapist, you’re opening yourself up in a vulnerable, impressionable way. What if your guide had less than noble intentions, even nefarious? What if they simply didn’t know what they were doing? Meditation and therapy are incredibly positive things that do a great good for many people, myself included. I wanted to explore the dark flipside of that.

I’m also really interested in the idea of neuro-linguistic programming — the power of spoken words and their effect on the the mind. Can you reshape someone’s reality just by saying the right things?

How did you approach the idea of “The Aviary” tape?

“The Aviary” is a real meditation tape from the seventies I heard about in high school, around 1995 or 1996. A friend who made cassette mixes had used a sample from it on one of his tapes. His dad had an original but after he made the mix, he lost the cassette before I could get a copy. I tried to find it online but there’s not a whole lot out there. We found some partial transcripts and tried to recreate it as faithfully as possible but had to take a few liberties to fill in the pieces.

As for the cast, I’ve been a fan of Misha Collins’ work on “Supernatural” and when Jason Zinoman — who wrote the excellent and absolutely essential book on horror “Shock Value” — mentioned to me they knew each other, I jumped at the opportunity to work with him. He was absolutely perfect for Dr. William Chambers. His voice is so controlled and commanding that there were times in the booth I forgot that I was working with an actor. Instead, I felt as if I were in the presence of the doctor himself. He sunk his teeth into the role and completely nailed it right away. Sophia Takal and Lawrence Levine are friends and both excellent directors and actors, and I’ve always wanted to cast them together as a couple – they’re married in real life. And Kersten Haile was in my segment of a Chiller film last year – a great, versatile actress – plays brief but very important role connected to the true nature of the piece.

We’ve made several cassettes to match the original Aviary release. It’s as accurate a recreation of the real thing as we could manage. A very limited number will soon go up for sale on the “Tales From Beyond The Pale” site. Side A is the “Tales” episode, and Side B is a 35-minute ambient soundscape piece available only on the cassette.

Digital is the preferred and easiest method of consuming as much content as quickly and efficiently as possible, but there’s something very appealing about the formality of the physical medium experience. I listen to (and collect) boatloads of vinyl, and one of my favorite things to do is to put on a record, sit back, and enjoy it – without the urge to click away or jump to another track. There’s a certain focus to it. In our hyper-stimulated era, a 30-minute uninterrupted side is a welcome relief.

How has this production approach impact storytelling for you?

One of the great things about Tales From Beyond The Pale is that it lets the writers and directors play with the expectation of how the audience experiences a “story,” both in the studio and live. This season is no different – there are some really excellent forays into unexpected territory. Glenn and Larry are incredibly encouraging of this kind of experimentation. For “The Chambers Tape,” I wanted to try something that was treated like an actual audio artifact: a primary source that cuts out the middleman (the storyteller) and involves the audience directly with the story itself. Using a meditation tape as the format allowed me to use the second person (which I’ve been intrigued by ever since Choose Your Own Adventure books and “Bright Lights, Big City”). Second person is a powerful, underutilized tool that has the ability to involve the audience even more directly: “You are doing this, you are seeing that.” It places the audience in the middle of the action. But it has its challenges – everyone brings their own personality, interpretations, and baggage to the table. It’s a real collaboration between the piece itself and the audience, which is exciting and unpredictable.

Specifically in regards to audio, I loved working within constraints of the meditation tape format. And a retro seventies style one at that. It was super fun creating the music and the overall sound design for the piece. There’s a dirtiness — an unsteady, detuned waviness to it all that I really enjoy – as if the tape itself is coming apart. I highly recommend listening in a good pair of headphones.

You’ve been experimenting with a lot of media. With Larry Fessenden, you co-wrote the PS4 game “Until Dawn.” What sort of new challenges did that present?

“Until Dawn” was an incredible experience, and writing with Larry is always a pleasure. The process was simultaneously incredibly rigid and remarkably freeing, in that the story beats were very precisely mapped out by the developer, Supermassive Games — who did a brilliant job — but we had to script many different versions of every scenario. So we could really explore character development in a way you don’t really get to do in normal linear writing. My analogy for it is that when you write a character in a film, you daydream about the many different ways a scene could go, how the character could react, how that could change the dynamics of all the other characters. With “Until Dawn,” we didn’t just daydream all those other versions – we wrote them all down.

It’s been a number of years since you tried out 3D with your short film “The Viewer” What do you make of that approach now? Any thoughts on virtual reality headsets?

I’m a big believer in exploring every possible medium that offers the opportunity to experience a story. 3D is a relatively untapped medium. It’s often used as a gimmick or an afterthought, but there have been interesting exceptions. Virtual reality is just as appealing. I’m working on one project right now as a sound designer, and it’s presenting some incredibly new, complex challenges in regards to audio mixing and design – which is exciting and provides opportunities to do things no one has ever done before. I’ve been developing a VR project very loosely based on “The Viewer” that I’d really like to get made. 3D was something I could experiment with for almost no money at all – but VR is unfortunately much more expensive and technical in ways that are exponentially more daunting, so it’s tough to get anything going without serious finance behind it.

I’ve got a couple electronic music albums ready to be released – one will be coming out soon and the other I’m about to start shopping around. I co-wrote a movie called “Bushwick,” which just started shooting this week in Brooklyn, with Dave Bautista, which is being directed by Cary Murnion and Jon Milott, who directed “Cooties.” We recently finished mixing Ti West’s new western “In a Valley of Violence,” which I sound-designed and composed some additional music for. And I have a few feature films that are slowly but surely forging their way towards production, hopefully sometime in 2016. 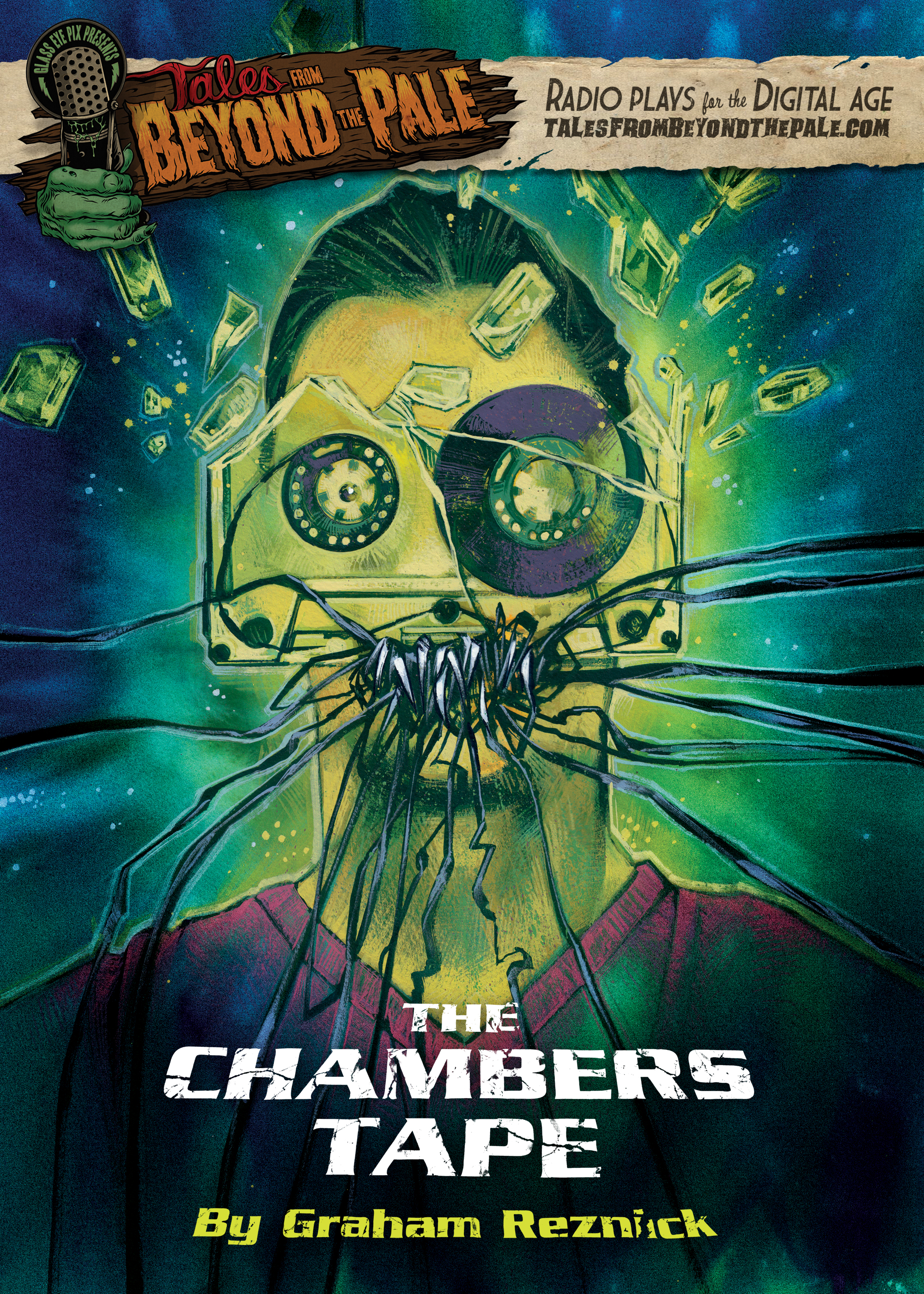 Tagged with: Graham Reznick, Season 3, Tales From Beyond The Pale, The Chambers Tape

« LISTEN NOW: Tourists in Trouble with James Felix McKenny’s THE TRIBUNAL OF MINOS – TALES FROM BEYOND THE PALE SEASON 3