Indiewire’s back with another Season 3 episode of TALES FROM BEYOND THE PALE. Listen in to the second installment in McQuaid’s loose “crime of passion trilogy.”

The season continues with filmmaker Glenn McQuaid’s “The Ripple at Cedar Lake.” Listen to the episode above, and read an interview with McQuaid conducted by Indiewire’s Eric Kohn about the inspiration for the episode below.

Where did the idea for this one come from?

“The Ripple at Cedar Lake” is the second part of a loose crime of passion trilogy that started with Season 2’s “The Crush.” I’m a big fan of EC’s Crime SuspenStories and wanted to tap into that world while keeping one foot firmly beyond the pale. While the double crossing in “The Crush” is coupled with a revenge from beyond the grave scenario, “Ripple” throws some weird science into the mix. I also wanted to put some sexuality into the audio drama format. Why not?

How has your relationship to this style of storytelling evolved?

I’ve become more confident in terms of committing to writing wilder storylines. Taking chances with different structures and tone is an awful lot easier when you’re writing a 30 page script that you know is going to get produced. It’s been very liberating for the writer in me. I’ve explored topics like religion, politics, war and dementia and been able to add my own stamp to them.

What’s the difference between performing live and recording in studio?

Performing “Tales from Beyond the Pale” live is a total blast. We only have one shot at getting everything right, so we have to go in really prepared. Sound design must already be built and our sound effects have to be organized in a way that’s easy to trigger live; the actors must rely on the foley artist for their physical performance, and the musicians have to hit all the right cues. It’s a lot to organize but once it’s all rolling, it’s incredible. Of course, things can go wrong live but that only adds to the magic.

The studio method is a lot more relaxed. The big difference is that we can have multiple takes which feels like a real luxury after the live experience. The studio pieces usually start with the vocal performance, and we build on it from there. The process is quite close to a film’s post production flow.

The more I read, the more I write, the easier it is for me to write. So l soak up a lot of novels, mostly horror fiction. Right now I’m on an eighties kick, reading people like Charles L. Grant, Robert R. McCammon and Gary Brandner — the pulpier the better.

I tend to write my “Tales” pretty quickly, or at least get a full first draft out of me before I can change my mind. We had a recent live show in Montreal and I surprised myself by writing three pieces before settling on one tale, which I then asked April Snellings to polish. I love collaborating with other writers. I’ve also had fun writing scripts with Clay McLeod Chapman and Ted Geoghegan.

You’ve taken on a bigger role this season by designing the music and sound design. What has that entailed?

I’ve been wanting to get deeper into sound design and music for a while now, so when we started off the season, I learned a few programs and sank my teeth into these aspects of the show. I’ve been tinkering with making my own music for a few years now, so it’s been really cool to get some tunes out there. I had a lot of fun scoring Jeff Buhler’s tale, “Guttermouth.” It’s got a real melodramatic 80s synth score, like “Pretty in Pink” by way of “Coil,” and it’s bananas. Music is probably my biggest obsession. I listen to absolutely everything, so it’s a real treat to get my own stuff out there. Larry, on top of everything else, is a terrific musician, so there’s a real respect and love for music going on in “Tales.”

How does gay content usually surface in horror films and what role does your work play in that?

This is a tough question. I think people are quite touchy when it comes to overt commentary on homosexuality in horror. I remember people were so annoyed at the two “Hostel” movies, calling them homophobic for even broaching the subject. It’s like people were saying Eli Roth had no right to be commenting on sexuality in these types of movies. I didn’t get the argument at all. I think those movies are great, especially the second one, which felt like vintage Hammer to me. But getting back to gay content: For the most part, I think the history of homosexuality in horror has been more covert but it occasionally comes to the surface. Films like “The Haunting” and even “Dracula’s Daughter” really went for it, and then there’s movies like “Tower of Evil,” where it’s all about John Hamill’s ass.

Writing gay content has never been at the top of my to-do list, but it’s definitely creeping into my work. “The Ripple at Cedar Lake” is probably more bisexual, though. Everyone is getting their leg over.

Gay visibility in pop culture has come a long way, thank God. When I was a kid, it was all evil queens and sissies and it had a profound effect on me. I thought those were the choices. I tried to pray the gay away for years — until l saw “Dynasty,” haha.

I’ve got a few feature scripts that I’m just starting to shop around and I’m currently working with April Snellings on something that we’re both really excited about. Larry and I also want to get out all the live Tales that we’ve been stockpiling. They’re really good! 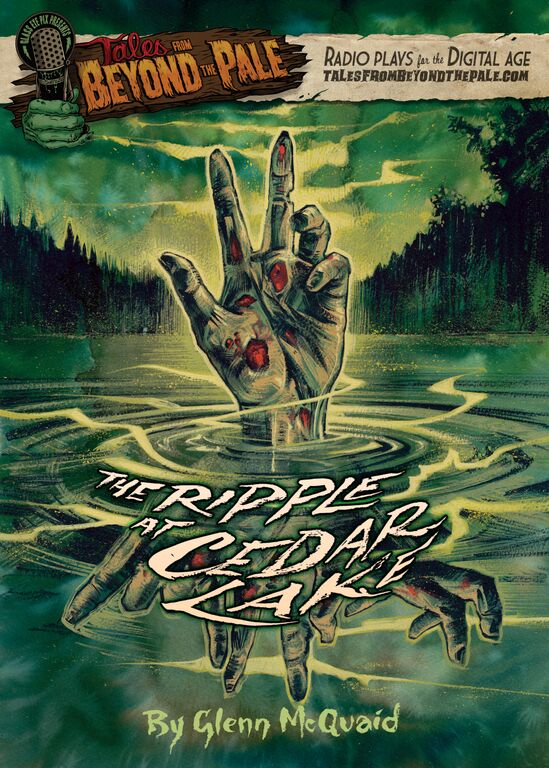 Tagged with: Glenn McQuaid, Season 3, Tales From Beyond The Pale, The Ripple at Cedar Lake